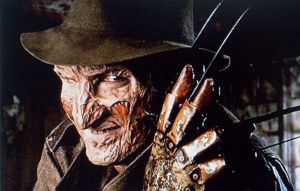 Someone once said that the difference between Horror and Fantasy is that in Fantasy the protagonists are capable of defending themselves against the monsters while in Horror, they’re not. I think I’ve paraphrased rather horribly but let’s be honest, I can’t even remember who said it in the first place. I think it is incredibly true.

If one looks at the Lord of the Rings (the movie) and take the orcs out of the move, drop them into a random American suburb and had them chase after big breasted women who ran up the stairs instead of out the house, it would be a horror. Similarly, if one took Freddy Kruger and dropped him into Lord of the Rings, the elves would figure out it was only a dream/nightmare create brilliant weapons and slay Freddy.

You might wonder why I’m thinking about these things, but picking the right genre can be critical to breaking into the publishing world. According to the market, it is almost writing suicide to write a horror novel and expect it to sell and according to Query Shark, there is only one agent currently accepting submissions for the horror genre. What this really means though is that if you write a horror, you’ve taken all of your eggs and put them all in one basket and if this agent doesn’t like your writing, your work or the font you chose to use in the query letter, you’ve flushed a year or more of your life down the crapper.

Put in a protagonist who is capable of defending himself against the horrors thrown against him and you have a fantasy and there are a lot more agents and hence a bigger market you can submit your work to and possibly break in.

This is particularly important as my latest project Spoil the Child treads a dangerous line between the two.

I’m not quite sure of when the group slowed down but I seem to remember it slowing down toward the end of last year because everyone had some things they were busy with and had to divert their attention to these other tasks and in the mean time one of our members came back with the news from WorldCon (I think) that the publishing world is no longer accepting longer works from first time authors because it was too hard to sell these works.  The limit for first time Epic Fantasy is a maximum of 120,000 words.  That means that if the average for a published novel is 400 words per page – epic fantasy novels from first time authors would be a maximum of 300 pages.

That’s not very epic is it?

It was probably at this point when the group really got to be rather inactive as everyone tried to figure how this would impact our ambitions going forward.  There is no way we’re going to be able to break into the publishing world if we are all writing something which wouldn’t be accepted.

But I’ve been thinking.  Patrick Rothfuss managed to sell his novel and I’m not only mentioning The Name of the Wind (pictured left) either.  I’m talking about the whole Kingslayer trilogy, which was really one novel.  There is no way that it was less than 120,000 words.  The Name of the Wind, which is now really part 1 of 3 of the whole novel must be longer than 250,000 words all by itself.  And when did he break in?  I have to say that I’m guessing here, but it must have been 2007/8 and that means that the industry has changed so much in 3/4 years.

It means that if we want to break in, we’re going to have to change our direction for the first novel before we move onto our real calling as epic fantasy writers.  The real question is in which direction to go.  My epic fantasy has always been behind my horror or “supernatural thriller” writing.  As of this evening, I am now 45% of the way through the latest draft of Pecan Hill.   The good news for me is that Pecan Hill is only planned to 100,000 words so there is no chance that I’ll have to trim the novel to hit the limit mark.

The bad news is that I have been busy with Pecan Hill non-stop for 3/4 years.  It’s pretty demoralising to go through the same story again and again when I want to move on.  I believe I’ve gone through this before, but there is so much more to write for me.  But Pecan Hill won’t let me move on until it’s been perfected.  If I have to compare it to anything, I’d have to say that it’s like having a child.  I’d say I’d throw it into the trunk and move on but I’m not quite ready to kill this darling just yet.  It’s too big.

But Pecan Hill is one of the options of breaking into the publishing world I’ve been considering.

The options I’ve been thinking about for how to get into the publishing world is basically the following:

The problem with options 2 and 3 is that even if I’m able to sell it and break in, I’m left with another problem.  I’d have broken in but in the wrong genre and would be left with the same problem of breaking into epic fantasy.  Although if I write under a pseudonym, the publishing world might be able to overlook the fact I’m writing in two different genres.

Coincidentally I’m following possibility 1 and 3, although I am seriously thinking of trying out option 2 as well.  Option 4 just doesn’t seem to be an option.